Please refrain from using vulgar langauge, creating fan fiction, and other nonsense. This is a kids' show after all. And, this is a wikia, intended to inform people who watch the show with more information about it.

It all began when High Roller, who was banished from East Citadel for insulting the old emperor and grew to hate other humans, got struck with a lightning bolt that gave him the ability to talk to animals. At the time, humans and animals lived together in great harmony. But then the vengeful and wicked High Roller fooled the animals into thinking humans were their enemies and enticed them with candy. Chaos quickly came as animal kings and queens began shunning humans from their castles, enslaving them, taking them hostage, and further persecuting them. This forced many humans to live underground or in other secretive places. Convinced that humans were sworn enemies, the animals began doing High Roller's bidding.

Fortunately, Monkey King (Commander ApeTrully) saw through the wicked High Roller's lies. He then donned a human disguise (based on a monkey's idea of a human), gathered a group of friends and people who also wanted to regain peace, and formed Big Green. Big Green holds many warriors and allies, such as First Squad, the loyal turtles, and the Tank Army, and together they work towards the goal of restoring peace.

Many of the adventures revolve around Monkey King, now called Commander ApeTrully, visiting various animals on High Roller's side and getting captured due to his naiveté. He then calls First Squad who rescues him and help him to finally befriend the animals that had captured him, usually through a competition. Episodes also revolve around other things like issues concerning previously befriended animals or competitions. Whatever the case, you can be sure that the adventures will be cool, funny, and action-packed, so be sure to join our heros in their quest to restore peace.

Featured Picture of the Week 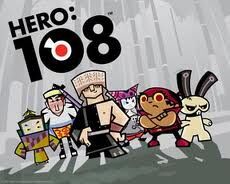 Retrieved from "https://hero108.fandom.com/wiki/Hero_108_Wiki?oldid=24331"
Community content is available under CC-BY-SA unless otherwise noted.