High Roller is a human warlord reigning at East Citadel. Because of his hatred of humans, he convinced the animal kingdoms to betray them and thus plunged Hidden Kingdom into war. This, in turn, led to the creation of Big Green, which became his sworn enemy. He was also an ally of Twin Masters.

In his youthful days, High Roller was a generally harmless, if impishly malicious, child. He was at that time a classmate of both Woo the Wise and Infinitum, the former of whom becoming his rival due to their disparate ideologies regarding their studies; namely, Woo believing in the great importance of education and High Roller professing the superiority of more pleasurable things, such as comic books. It was during this time that High Roller began to hone his charismatic skills by persuading his classmates with objects such as candy.

At an unclear point in his life, High Roller trained under Chiung Ming. It's unknown under what circumstances this occurred, as Chiung Ming was imprisoned what's implied to be a long time ago.

Later in life, High Roller would become a happy court jester, laughing and playing games. But, in a typically arrogant move, he insulted the former Emperor of Hidden Kingdom and was immediately cast from the great East Citadel. He wandered alone in the forest, brooding and learning to hate humans. As fate would have it, he was struck by lightning, and gained the ability to speak the language of animals. He quickly discovered animals' great weakness for candy and bribed them with sweets. Many animals joined his cause and helped kick humans out of their homes and castles. Now many animal kings and queens pay homage to High Roller and do his bidding.

As the emperor of the East Citadel, High Roller generally makes a point to do whatever he wants and what he typically wants to do is attack humans, or more accurately, get animals to attack humans for him, eat candy and play games. In fact, High Roller is a master of many folk games and these skills actually translate to the battlefield in dangerously unexpected ways. Combine this with the fact that he likes to play dirty, and High Roller is a formidable opponent for even the most skilled members of First Squad!

High Roller is very selfish and usually acts like a spoiled kid. For example, he hates books (with the exeption of comicbooks) and likes candy in spite of  the fact it gives him cavities. He is quick to anger, and will often become livid with rage when things do not turn out his way, usually throwing tantrums when this happens. He also becomes bored just as quickly, and often needs to find various activities to entertain himself. He only puts the strongest animals in his army to guard him, such as the eagles. Despite his childish and selfish desires, he does have a little honor, such as the time he stopped the Zebra Brothers from destroying the Bell Tower. However, he then destroyed it himself in a fit of rage. Likewise, he has been known to honor agreements and bets, even when he held the military strength to go back on his word, such as when he freed Big Green's troops when Lin Chung won his bet and showed him something more impressive than Chameleon Queen's giant screen.

High Roller also acts like a bully, to try and get his own way, as seen in many instances, notably when he pinches Chameleon Queen and makes her cry, making her do as he wants. He also uses dire threats to get his way. And if his minions fail him, he issues serious, often cruel punishments.

While he gains more and more skill, High Roller refuses to accept the fact he is a human, the very species he grew to hate due to them throwing him out.

High Roller is quite short, and wears a blue emperor robe that has long sleeves that usually cover his hands, and has a yellow Chinese lollipop symbol on the front of it. He also wears a black hat with an arrow sticking out, black shorts and red shoes with white soles. His right eye appears to be blind, with a grey iris ring and no pupil, while his left eye has a black pupil and a black cog wheel-like pattern around it. He has a small red nose, a shaven scalp, pointy teeth, and pale skin.

In folk game competitions, High Roller wears a red skintight suit with a gold dragon on the front.

High roller on his trike throne 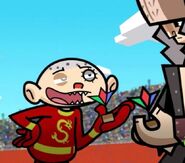 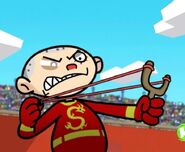 High Roller with a catapult 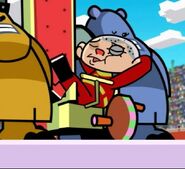 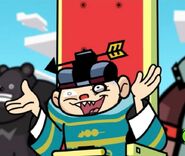 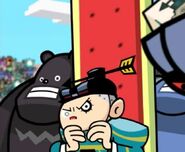 High Roller looking like he's up to no good 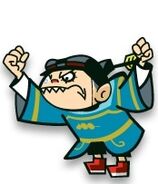 High Roller laughing while hanging on

High Roller with the chameleon tanks

High Roller with a frog head

High Roller with the treasure chest

High Roller looking at a tiny Mighty Ray, wondering why he has two

High Roller out at sea

High Roller with a candle

High Roller staring in horror at the zebra brothers

High Roller with a giant lollipop

High Roller as a Hydra

High Roller as he appears in the intro of the original concept of Hero: 108

High Roller and animals standing in front of a castle, original concept only

High Roller lighting Bearstomp's canon fuse in the intro of the original concept of Hero: 108

High Roller with a big grin

High Roller as a child

HighRoller in an earlier concept

HighRoller gesturing with his hands

HighRoller being hit by chaotic energy

Controlled by a Cocky Alien

High Roller and his Eagles