Peacock Queen is golden-orange with a blue beak, blue eyes and an orange tail with yellow and purple patterns on it. Much like other peacocks, she has a long neck, a diamond shaped head, thin black legs, black feathers that resemble pointing arrows on top of her head and a long tail that fans out, showing pretty coloured feathers. She also usually carries a purple hand fan with her wing.

To begin with, Peacock Queen was very snooty and shallow. She only thought of herself and was very vain, becoming obsessed with her beauty. However, after the events of Peacock Castle when she saw that Yaksha still loved Mystique Sonia no matter what she looked like, she learned that looks are not really everything and became a lot nicer, even helping Big Green with their timekeeping problem. 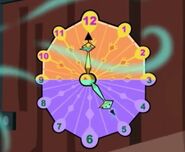 Add a photo to this gallery

Retrieved from "https://hero108.fandom.com/wiki/Peacock_Queen?oldid=23131"
Community content is available under CC-BY-SA unless otherwise noted.